The Lan­gres (its small­er size is called the Petit Lan­gres) has an indent in the cen­ter which allows for the tra­di­tion­al pour­ing of white wine or — as it is from the same region — Cham­pagne. This cheese has been around since the 17th cen­tu­ry, but only gained AOC and DOP sta­tus in the 1990s. 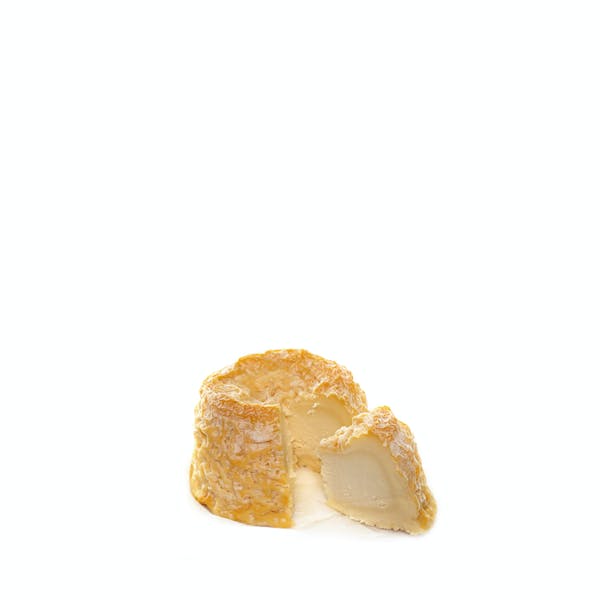 This washed-rind cheese gains its sunken, souf­flé-like top (“la fontaine” or ​“la curvette”) because it is not turned as it matures. Brine is allowed to seep into the inte­ri­or of the cheese, giv­ing it its rich­ness, pun­gency, and fruity fla­vor. The yel­low col­or comes from the inclu­sion of annat­to in the wash­ing brine dur­ing a matur­ing process that lasts from fif­teen days to one month for the Petit Lan­gres and two to three months for the full-sized Lan­gres disc. The pâté is firm and sup­ple, but melts in the mouth, and the more mature disks have an almost spicy tang.

For a show-stop­ping begin­ning to an inti­mate evening, this cheese is per­fect. Tra­di­tion­al­ly, one pours Cham­pagne or Marc au Bour­gogne into the sunken top. This prepa­ra­tion goes well with a glass of Bor­deaux or Bur­gundy wine, a light sal­ad, and a baguette split for two.

A CHEESE TO SING ABOUT

The his­to­ry of Lan­gres can be traced back to Cham­pagne, France in the 13th cen­tu­ry. It was first men­tioned in a song com­posed by a trav­el­ling Domini­can monk in the city of Lan­gres. This cheese enjoyed peri­ods of pop­u­lar­i­ty and decline till after World War II, when a union of cheese­mak­ers from Cham­pagne made it their goal to obtain AOC sta­tus for it — which they did in 1991. It gained DOP sta­tus with the EU only five years later.

Cheeses (except brined ones in jars) should be stored in the crisper or the but­ter draw­er of a refrig­er­a­tor, not on the shelves them­selves. This is to help reg­u­late their tem­per­a­ture and humid­i­ty lev­els — and pre­vents the for­ma­tion of mold. Once opened, they should not be kept in their orig­i­nal pack­ag­ing. Soft cheeses with del­i­cate rinds need to breathe, so they are best placed in glass con­tain­ers lined with paper tow­els to absorb extra mois­ture. Leave the lid open a tiny bit for air to cir­cu­late. Cheeses are air-flown from France on demand. They are meant to be con­sumed with­in 1 to 2 weeks of their arrival at your residence.